Since I started biking, I’ve ridden in about six organized rides. I’ve been impressed with the organization of each one, even though some are inevitably going to be better done than others. A lot of work goes into putting on a ride, and it wouldn’t get done without the help of volunteers.

I was really  wowed by the number of volunteers that helped put on the MS ride last month. To get 11,600 riders across miles and miles of Texas took some tremendous planning to begin with, and then when the ride’s first day was rained out, all the ride workers had to be coordinated and new plans made within hours. Not only did the job get done, it was done without a hitch.

So when the Real Ale Ride appeared on the calendar, I decided I wouldn’t ride it this year, I would work it. I filled out an online form during this past week, and signed up for two different roles.

Thursday afternoon, I joined four other folks for ride packet pickup. It was at the north store of Bicycle Sport Shop, which is a main ride sponsor. A worker for Red Licorice Events, who is doing all the logistical work on the ride, pulled up with a car loaded with boxes of t-shirts, ride packets, and other paraphernalia. We sorted it all out, and were handing out materials even before the 3 p.m. start time. 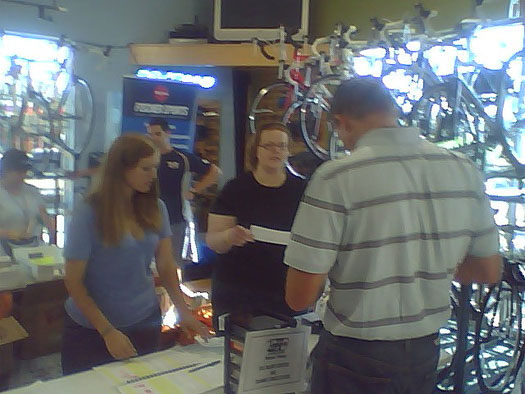 The crowd came in waves, sometimes with people lined up five deep, but at other times leaving us standing around talking. The work wasn’t difficult, but we had to pay attention. It’s pretty easy to miss a step like leaving a wrist band out of a packet, or forgetting to include the helmet number along with the jersey number. I was surprised at how many people registered for the ride at the store, rather than doing it earlier online. At 7 p.m. when the store closed, we got all the t-shirts boxed up and stacked at the back of the store for delivery to their other location the next day.

My alarm went off at 5 a.m. Saturday, so I could get breakfasted and dressed and on the road for Blanco, Texas, about 40 miles west of Austin. I would be working the starting line area, and since the start was moved up to 7:30 a.m. this year, an early start for me was mandatory. 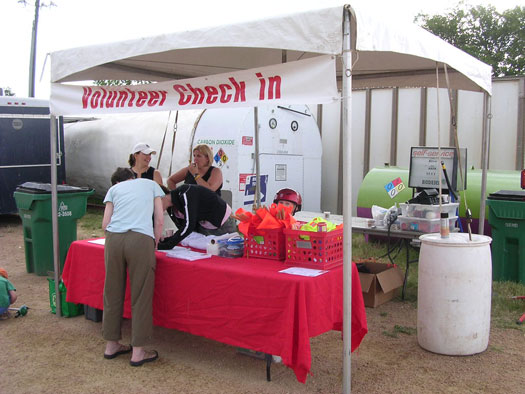 I checked in at the volunteer tent, and asked about my duties. “I don’t really know,” said one of the workers. “Find Erin. She’ll tell you. She’s on a bike with a basket. You can’t miss her.”

I couldn’t find her, though, and with 7:30 getting closer, I was concerned about the start. I enlisted the help of another volunteer to move the staging signs into place. The 80-milers would start first, then 15 minutes later, the 65-milers, and the 50s, 30s and 15s would each start at 15-minute intervals.

Then Erin found me. I knew right away that I was not going to mind working for her today. Here was a Texas-style ride starter who would be the envy of any ride in the country, whether there’s a cowboy connection or not. Erin is the co-owner of Red Licorice Events, the company that runs the Real Ale Ride for Bicycle Sports Shop. Red Licorice runs a dozen triathlon and running events each year on their own, as well as the Real Ale Ride under contract. Although Erin was constantly bombarded with cell phone calls and walkie-talkie squawks, she kept her cool, dealt with each question quickly and efficiently, and always kept it fun. She chatted and flirted with riders in the front row, and greeted many by name. She put a bullhorn in my hand, and showed me how to use it. I had to tell the riders to ride slow from the start down the hill to the main highway, because the hill they were on had speed bumps. Then they had to be reminded to keep to the right once they hit the highway, and not ride in the center lane. If necessary, we would stop the riders in the starting area to let bike traffic spread out a bit on the main road.  Erin would blow the airhorn to start each wave.

The 80-mile riders were the first to go. Their 7:30 start was moved up from last year, when the ride had to contend with very hot temperatures. This morning, while it was in the high 70s and would get hotter, the clouds hung around, keeping things cool. A few raindrops even spattered us while we waited for the clock to tick down. 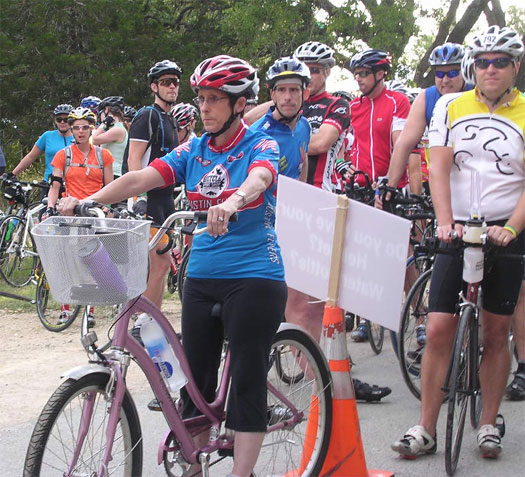 In appreciation for the city of Blanco’s support of the ride, Mayor Tina Gourley was designated to lead off the riders. She looked apprehensive on her cruiser in front of the 80-mile hammerheads, but later told me she got started without any trouble and made it to her house, where she parked her bike, grabbed her dog, and returned to the staging area.

The five different groups got off the starting line, with only one minor collision between bikes. No injuries. Then, we volunteers looked at each other, wondering what there would be to do. Erin asked me to find some hoses to run from the Real Ale brewery (did I mention that the ride starts and finishes at a microbrewery?) to some kiddie pools that had been set up under a huge live oak tree, and fill them up. Then, I took apart some leftover signs and packed them away in the Red Licorice trailer. 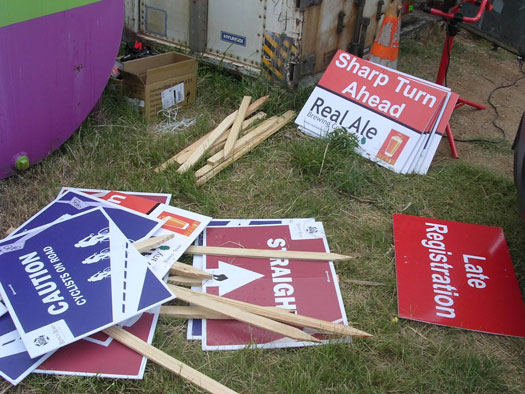 Most of my work after the ride started was mindless and menial, but necessary.

Volunteering has its perks, of course. This ride featured all sorts of free stuff for riders: beer from the brewery, a barbeque lunch, bottled iced tea, massages… the list goes on. Once our work was done and we waited for the bulk of the riders to come in, we got to get our food and drink, too.

But most of the rest of the morning was spent in the Volunteer tent, chatting with the other folks. I was surprised to learn that many of the volunteers were not bikers. Working these events is just a fun thing for them to do. Others had a motivation similar to mine. “I have volunteer guilt,” said John, who I worked with on Thursday. “I’ve ridden in a lot of these, and it’s time to give back.”

For the rest of the day, we had to answer a continual stream of questions as riders returned from the course. It didn’t bother me if I didn’t have the answer, because it gave me an excuse to find Erin and ask her.

My favorite question came just before I was to leave for the day:

“Say, can you help me? I want to get a white ride t-shirt. I just can’t wear this burnt orange one.”

I looked at his cap with its maroon Texas A & M logo. “Aggie, huh? I think they’re all gone, but try the merchandise tent over there.”

My shift was done at 1 p.m. The area in front of the brewery was crowded with riders, and the lines for beer and barbeque were quite long. I hunted down Erin to tell her I was leaving, and got a hug and an invitation to come back next year.

I’ll be back. Maybe not on this ride, because I want to ride it next year, but probably on others. As I think we all realize, these rides wouldn’t happen without the work of the volunteers. If you ride, you might consider “paying it forward” and helping out sometime.