One of my biking buddies has a saying: “Wind, rain, cold. Whenever two out of those three conditions are met, I don’t ride.”

Seems like we’ve been putting up with those conditions a lot lately — mainly cold and wind. My riding for February has tanked. The rest of the country is putting up with a brutal winter, and even here in Central Texas, it’s been colder than usual for longer than usual.

They crazy thing is, I’ve just come into some new biking duds — a couple of thermal jerseys. I’ve worn them twice. They work great, and I’ve been comfortable in temperatures in the 40s (4-6C), but those have been our milder temps for the last few weeks. When we’ve gotten a brief respite, I’ve been at work.

Then, the weather lightened up this weekend. Saturday saw the sun come out, and temperatures in the 60s. “Are you up for a ride?” asked my wife, pulling on a long-sleeved jersey.

I wasn’t. I was sick. First decent biking weekend we’ve had in two weeks, and I came down with a stomach virus. It was much safer for me to stick close to home.

Got lucky Sunday, though. The bug passed, the day warmed up to 72 (22C), and I not only rode with my wife, but I struck out on my own after we got home, and did a nice 21 miles. Felt good to wear short sleeves and shorts again.

But I’m not sure how long that will last. The forecast for Monday calls for a high around 47 (8C), with a brisk wind from the north and rain showers.

Three out of three. No matter, I’ll be working. I’ll keep my fingers crossed that by Friday, things will be bikable again.

It’s been a tough summer around here. Maybe not as bad as last year, when we hit 100 degrees (38C) for 90 days. This year, states in the Midwest farther north of here got clobbered with really hot weather.

So I was looking forward to today’s club ride out on the Fitzhugh route. A cold front was due to pass through our area overnight, and lower temperatures to the bearable range. Now, bear in mind that this is a Texas cold front. While we pride ourselves on doing everything bigger and better in Texas, our cold fronts leave a lot to be desired. When I stuck my head outside to get the paper, it was 70 degrees (21C). For much of the country, 70 is often the high temperature on a fall day. Here, it’s the overnight low after a cold front.

Still, it meant we’d be riding in conditions we haven’t seen since April. I had planned to go the full route, for a 46-mile round trip, but Mrs. Noob was leaving at noon on a business trip out of town, and wanted me back home by then. So I decided to cut my route to the usual “B” rider turnaround, at Ranch Road 12.

A good turnout today, probably because the weather was so benign. In addition to temps we haven’t seen for awhile, there was almost no wind. Yesterday, a stiff wind blew from the north all day, and predictions were for it to continue today as well.

The weather must also have put some zip in the legs of the peloton. I was hard pressed to keep up with them as we pedaled through the neighborhood, on our way out to the country. A couple of B riders fell back right off the bat. I expected they’d catch up later.

On Circle Drive, I saw Buddy and Jan as two dots in the distance. I was pedaling easy, waiting for Brian to catch back on. He had been held up by two stop lights the rest of the group had missed. But when I looked over my shoulder a couple of miles later, I saw nothing. I rode with Rob and a young German exchange student, who I thought would be a fast rider, but who seemed content to hang back with us.

It was on this stretch, about six or eight miles into the ride, that I realized something — I was strong today. I caught Buddy and Jan on Fitzhugh, and when the road started to dip and curve in a nice series of mild downhills, I turned on the juice. The German was the only one who kept up with me. I took the hairpin curve at the low point of the route faster than I ever have before, but the student was unimpressed, and sailed by. Okay, so I wasn’t as strong today as I was trying to convince myself I was. But I got to the turnaround about 16 miles out well ahead of the others.

Jan was the first to catch up. “I’m going to keep going,” she said.

“Do that — the route is even more scenic from here on out,” I replied, feeling a little pang of envy since I had hoped to make that same extended trip as she was doing.

Buddy caught up, and told me Rob had turned around, along with Brian. I had already seen New York John heading back — he went even shorter than we were today.

So it was just me and Buddy on the return trip. I still had lots of energy, and covered lots of ground at 26-28 mph, terrain assisted of course. We got to the Starbucks where the ride had started, and grabbed two seats under an umbrella to stay in the shade. Even by this time, the temperature had only risen to 80 degrees (26C).

Eventually, the first of the A riders came in. As they joined us at the outdoor tables, most of the talk concerned the weather — and just how great it was to ride in conditions like today. I said my goodbyes and headed home, noticing that I wasn’t awash in sweat the way I have been for the last several months.

It was a nice ride in the country, under clear, sunny skies — but moderate conditions. Couldn’t be better. It’s for days like this that I took up cycling. 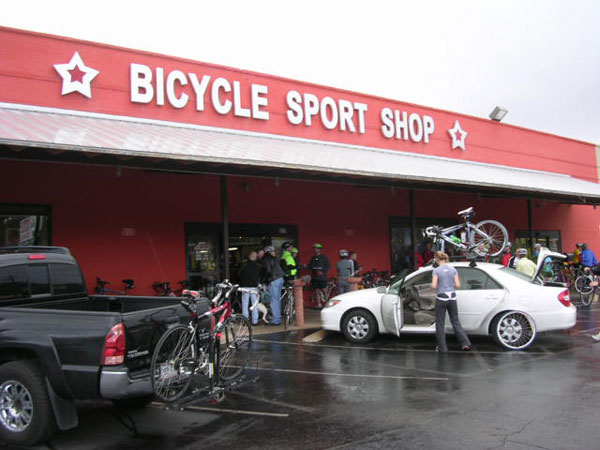 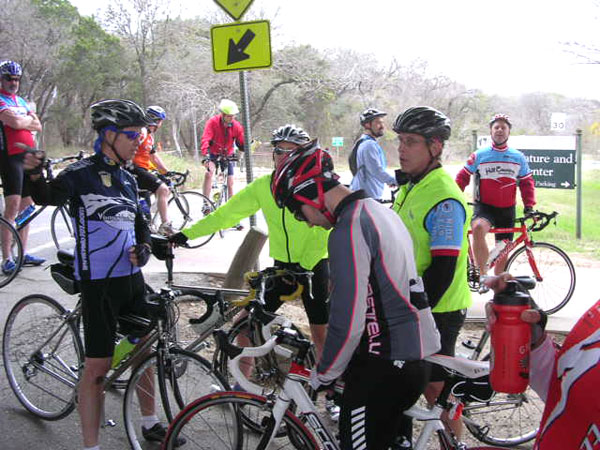