It looks like the cut on the shoe helped the toe numbness — but just a bit. I got the tingling sensation at about mile 24 of today’s ride. I’ve got some additional treatments for the shoe lined up, but whatever I do, it’s going to ruin the shoe in the long run. So I expect that new shoes are in my future at some point. And they’ll have to be wides. By the way, do most bike shoes come in widths? Or do only a few companies make different widths? I really haven’t paid much attention to the different makes and models out there.

Autumn is trying to sneak up on central Texas. The official overnight low was 72°F (22°C), but it felt like the 60s when we started the ride. That made for great riding conditions, and the ride itself was very encouraging. It was the Fitzhugh Road route again — one I enjoy, but one I have had trouble with in the past because of its rolling hills. I had hoped several B riders would join up, so we could ride the rollers without trying to match the pace of the A riders.

But I was the only B to show up today. I told the ride leader I would turn around at Ranch Road 12, where the group takes a break. They continue on for another 10 miles or so.

Son of a gun, when we got out to Fitzhugh Road, I was still in the middle of the pack. The hill routes I have been riding recently must be working. I was mentally patting myself on the back for the next couple miles, when suddenly I looked up — and I was alone.

I don’t know when they kicked it up a notch, but evidently I didn’t get the message. Lucky for me, the ride leader considers it his job to be the “sweep,” and he was off the back of the pack, too. We rode the several miles to Ranch Road 12 together. 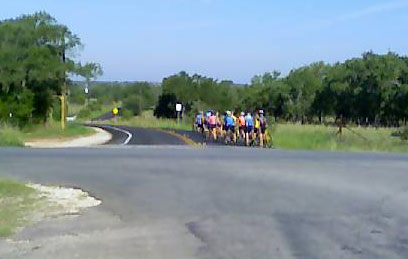 The group takes a break at Ranch Road 12. This was where I turned around.

The ride back was routine — heavier traffic on Fitzhugh this morning than usual — and when I got to the corner of U.S. 290 and Fitzhugh I noticed the numb toe thing. A short walk around the convenience store parking lot, a brief break to drain my water bottle, and off for home.

Totals: 33.5 miles, 15.1 mph avg speed. Next week is the metric century warmup for the century ride in October.