I missed our Sunday ride two weekends in a row while on vacation, and it turned out that the first weekend  was much more eventful than usual.

The B ride took a loop route that included some moderately challenging hills. Everything was going well, until the group reached an intersection just two miles from the finish. It’s a stoplighted intersection, with a right turn to a southbound road with a bike lane at that point.

The light was red for the bikers. They rode up to the intersection, and turned right without coming to a complete stop at the light. Next thing you know, an Austin Police car was pulling them over. 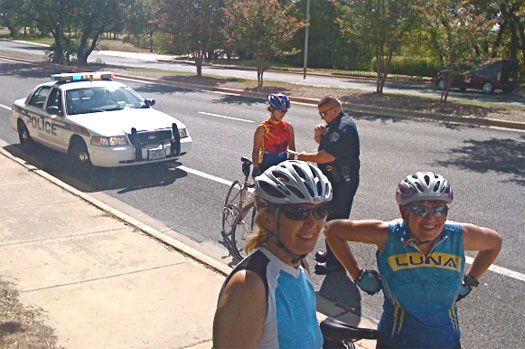 Penny gets her ticket while two other club members stand by in disbelief.

The officer issued tickets to four riders for failing to come to a complete stop. Each ticket carries a fine of $217. Meanwhile, one of the riders saw three cars roll through the same red light while making a right turn onto the same street, and wondered why the officer wasn’t ticketing them, since a two-ton automobile is a greater hazard than a 20-pound bike.

The officer told the group he was issuing citations because of the grief the Austin Police Department has been getting over cyclists breaking traffic laws. Letters to the editor in the newspaper seem to be getting more vociferous lately over cyclists, but I don’t think it’s any different here than in any other city.

The recipients of the tickets agree that they did not follow the letter of the law — they did not come to a complete stop — but they also think that since no safety issue was involved, the officer should have let them off with warnings instead. Now, they’re faced with paying a large fine. Pippa, the ride leader for the week, said, “I shall go to Court just because I’m British and like a good argument.” The others are still debating whether to join her.

One benefit of the incident has been increased discussion within the club about obeying traffic laws more strictly. The B ride this past weekend was led by a club member who is a League Certified Instructor, and required stops at all lights and signs. He said there was not a single instance of a rider rolling through a stop sign, and called it an “impressive” sight.

In the end, I suppose the ticket episode will be beneficial (although those who got the tickets will have a bad taste in their mouths for some time to come) because of the new emphasis on obeying laws within the club. It seems like a tough way to learn the lesson, though. Have any readers run into similar police enforcement crackdowns in your areas?