Sometimes, cities try to deal with real or imagined bike problems by taking drastic measures. The Austin American-Statesman reported last week on an ordinance passed in Manor, Texas, that bans bikes from a stretch of road in the small city.

Manor is just east of Austin. The road in question is called Blake-Manor Road, and runs out of town to the southeast, giving bikers access to rural roads in the area. But it’s in bad shape, narrow, with large cracks and heavy traffic.

The Manor City Manager says the road is a “poor place” to ride bikes. He says there are other places for bikers to ride. 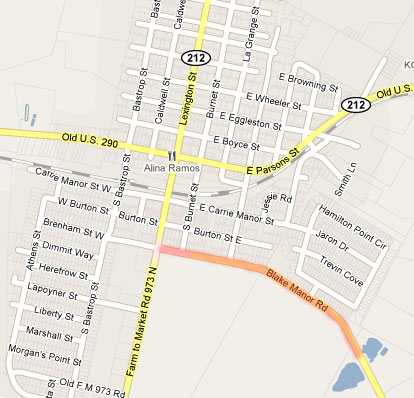 The map shows the road in question, marked in pink. There appear to be other city streets to ride, but getting out of town to the southeast — not so much.

The city has no plans to repair the road.

The ordinance passed after a cyclist filed a $250,000 claim with the city after being hurt in a bicycle accident on the road. The city denied the claim, since the accident happened outside the city’s jurisdiction.

Predictably, cyclists are claiming discrimination. They think the road should be fixed.

But in the meantime, enforcement of the cycling ban is expected to begin soon, and bikers could be in for a $200 fine if they ride the stretch in question.

Manor is on the opposite end of Austin from where I live, so I’m not familiar with the road in question, and I’m running this item simply to point out that sometimes, dealing with cyclists can take a drastic turn.

Have you run into situations in your locales where cyclists are prohibited from using public streets or roadways? How was it resolved?