Today’s ride was nothing to brag about in terms of my performance, but it was one that I will remember for a long time because of the company.

Guest poster Jeff Hemmel was in Austin this weekend, and joined me for 33 miles in the Texas Hill Country.  Jeff posts here under the label, “Hemmel’s Ride.” Product reviews are his forte. He’s evaluated saddles, water bottles, and chamois cream, among other things. He also wrote about a ride he took with Bob Roll last year, and the unease he experienced when riding in an all-white kit.

In his non-blogging life, Jeff is a magazine writer, and was in town to cover “Aquapalooza” for Boating magazine. But while here, he made arrangements to rent a bike from Mellow Johnny’s, and I met him there Sunday morning.

We headed out for my favorite riding area — Dripping Springs. I thought that a Florida guy like Jeff would enjoy some hill riding. What I forgot was that Jeff’s family has a summer place in the Adirondacks, so he probably rides hills — big ones — a lot more than I do. On the route’s most challenging hill, Jeff kept it in the big ring and rolled easily up the grade.

Meanwhile, the summer sun was taking its toll on me. We started the ride at 11 a.m. — much later than I like to get going during the hot summer months — and I was glad to take the occasional break, like stopping to photograph Jeff with some Texas longhorn cattle.

He didn’t push me too hard, though. His unfamiliarity with the roads kept him from leaving me too far back. After two-and-a-half hours in the saddle, we were glad to head back to Austin with the air conditioning at full blast, and put down massive quantities of Mountain Dew and glasses of water at a local deli. 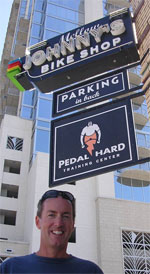 Then back to Mellow Johnny’s (if you don’t already know it, it’s the bike store partly owned by Lance Armstrong) to buy some souvenirs for family members back home, catch a few minutes of the Tour de France on TV (Ooh! Bad day for Lance) and pose for pictures.

It’s funny how easily online friendships convert to face-to-face friendships. From our first greeting, I had the sense that we were simply continuing a conversation that started through email over a year ago. We talked about our writing endeavors — Jeff writes his own blog, “Ride Liquid,” on personal watercraft — and swapped ideas for posts. Bike Noob readers can expect some good stuff from him in the future. And as for me, I’m glad to have in Jeff a contributor who adds to the value we offer here.