After being reasonably happy with my WTB Speed V for about a year, it went and fell apart on me. I decided the quick and easy way to repair it was to wrap it with duct tape. Great in theory, but it fell short in practice. The pumping motion of my pedaling legs caused the tape to bunch up. I took one 30-mile ride on the taped saddle, and really felt it afterwards. I figured I’d have to shop for a new saddle.

But then, pulling into the garage, I saw the answer right in front of my eyes. My old Raleigh had a saddle that was almost new. I took pilfered it from the unused 10-speed and put it on the Specialized.

The saddle is a F0rte Classic. Forte, of course, is the house brand of Performance Bicycle, the nationwide chain. I had bought it back in 2007, when the saddle I had on the Raleigh proved to be too uncomfortable. But after riding the Forte on my first metric century, it was evident I’d made a bad move. My bottom suffered during that ride. A few months after, I bought my current bike and forgot about the Forte. 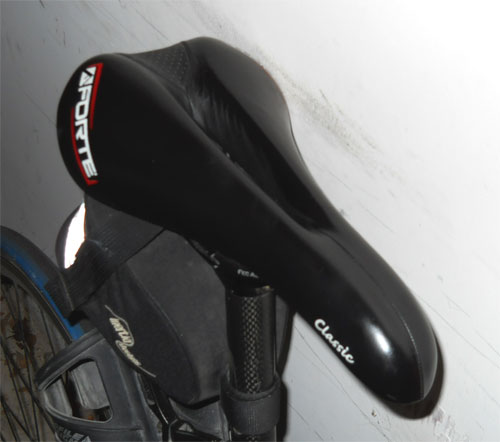 At first blush, it might prove to be a good replacement for the WTB. Performance bills the Classic as “ideal” for long rides. After my metric experience, I was skeptical at best. But I’ve ridden it several times, rides of 15-20 miles, and it seems to be pretty good.

Why the difference?  I believe it all has to do with bike fit. That Raleigh’s frame is a bit too large for me, and I had never been fitted for that bike, anyway. But I did get a professional fitting for the Specialized, and I kept the key dimensions handy just in case I did have to make adjustments to the saddle. It’s amazing how different a perch can feel when the rest of your body is in a comfortable position.

The Classic has semi-soft padding all around, which I like. I don’t do well with the hard, skinny, racing-style saddles. It also has a center cutout, which I can take or leave. I’ve ridden with and without cutouts, and in my case, they don’t seem to make much difference. I think it has only about 250 miles on it, so it’s just like new.

With the weekend coming up, I’ll be getting out for some longer rides than I’ve subjected the saddle to so far. We’ll see if it lives up to its billing as a long-distance saddle. However it turns out, you can be sure I’ll let you know in a future post.