Nowadays, I find that comfort on my bike is the most important thing I can aspire to. Perhaps that’s because I’ve spent so much uncomfortable time in the saddle. (Oh, and speaking of saddles, that Forte I put on the bike a few weeks ago is working out nicely. Who’d a thunk?)

So when I came across this oddball design this week, I had to stop for a closer look. It’s called the Roundtail, and instead of having a diamond-shaped frame, it uses two circular rings in the rear. They’re supposed to dissipate road vibrations before they make it up to the rider’s derriere. 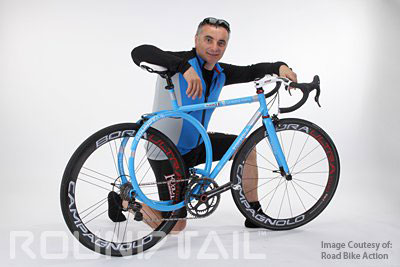 The Roundtail is the brainchild of Lou Tortola of Windsor, Ontario, Canada. He claims it absorbs 60 times more road vibrations than a standard double diamond frame. I don’t know anything about bike geometry, but if one can get past the bizarre look, I can see that there can be some relief in the design. Despite the rings, the frames are sized traditionally.

Here’s a YouTube video showing the Roundtail out on a ride.

The frame reportedly retails for $2,000. That’s just the frame, mind you. I’m not endorsing the Roundtail — I don’t know enough about it yet. But it will be interesting to see if the design takes off.