One of the A riders in the club posted on the Yahoo group that he was making the move to CO2 cartridges, after many years of resisting them. That started online discussions that took two separate tracks.

Another member asked, “How many pounds of pressure does a 12 gram cartridge impart to a 700×23 tire? I use 16g cans and still have trouble getting home with the optimum 92-94 lbs onboard.”

The Internet is a wonderful thing. It doesn’t take long before answers start rolling in. Multiple answers.

But that doesn’t allow for individual differences. The fellow who posted that probably doesn’t weight more than 130 pounds soaking wet. The original poster followed up:

“Am I the only one who rides 25 mm tires? What did your research say about the pressures in the larger road tire?”

“I ride 25s too,” chimed in another member, “and am somewhat heaver than Steve so you probably will not be surprised to hear that I only roll with the 16s on the road bike.  However, I also put some Gatorskins on the wheels so I don’t get flats very often any longer [although I just jinxed it and am sure to get a flat on my next ride] so the extra cheese spent on the threaded 16 gram cartridges isn’t a big deal.  If you use less than 6 of these a year, it’s not a major expense.” But he also had a practical suggestion.

I imagined pffffft! sounds coming from garages all over the neighborhood as cyclists took him up on that idea.

Then, of course, there’s that complication you get with CO2:

“Bear in mind that CO2 bleeds out of a tire much faster than pumped air,” wrote the 130-pounder, “so if you fix the flat in the early part of a three-hour ride, you will find a lower pressure when you get home. This is why, after fixing a flat on the road with CO2, I always deflate the tire and refill it with a pump at home. However, unless it gets down in the low 80 lbs range, you shouldn’t have any problems short of a pinch flat if you hit a big pothole or rock.”

Okay, this is all good information. But one member had a great idea: Go right to the source. The Genuine Innovations website has a link to an inflation chart.

What was the second discussion track? Cost, of course.

The original poster wrote: “If you buy cartridges from a bike shop they can be pretty expensive. I just checked online and it appears that you can get them reasonably cheap if you get a bunch of them. For example you can get a box of 50 16 gram non-threaded cartidges for $50 including shipping. And different prices for different amounts. but 50 for $50 seems about the best.”

“+1 on that recommendation,” said a third.  “I buy mine in bulk from a discount sporting goods store.  The only thing is that these do not have the threads to screw into some of the smaller nozzles.  I had to use it this weekend and a single Crossmark CO2 cartridge inflated my tire in one shot.”

Well, that was settled pretty quickly. Looks like a bunch of my club pals are headed for Wal-Mart to get their CO2. But one of the previous commenters signed off with some wise advice:

“Even though I’ve had good luck with cartridges, I still have a frame pump attached to my bike just in case Mr. Murphy is drafting.”

After my fumbling experience with a flat tire last month, I decided to rethink my practice of carrying CO2 cartridges for dealing with flats on the road. I still think the cartridges are a neat solution to the space and weight challenge bikers face. But I’ve never felt that they worked the way they’re supposed to — that the tire inflated as much as it needed to (Yes, I know — it’s not the tool, it’s the carpenter). So I decided to go in the other direction. I bought a mini pump.

Actually, it’s kind of a hybrid between a frame mounted pump and a mini pump. It’s a Topeak Road Morph. And sharp-eyed readers will recognize that it’s not exactly new. On my first ride carrying the pump, it was the indirect cause of my fall.

The switch to the pump was not without some adjustments. Fall aside, I had to deal with two other problems: mounting it to the frame and a quality deficiency.

The Road Morph is not really a mini-pump, which some riders carry in their jersey pockets. It’s a little too big for that. So it must be mounted on the frame. Topeak gives the owner two options for that: fastening it to the top tube with zip ties, or attaching to the seat tube using the water bottle braze-ons.

I opted to zip tie it to the top tube. That turned out not to be the best solution, at least for me. The zip ties kept catching on the inside of my thighs when I dismounted, even after trimming the ties back as far as possible. I was concerned they would tear my riding shorts. Then, the hose popped out of its cradle when I rode on a rough stretch of road.

The second deficiency was a quality issue. The bezel that attaches to the tire valve was missing. It’s not an obvious thing, because the end of the hose looks pretty normal even without it. I didn’t discover it was missing until the morning of my century, when I had to scramble to find a floor pump to top off my tires. I rode the century with the pump zip tied to the frame, but pulled it off as soon as I got home after the ride. 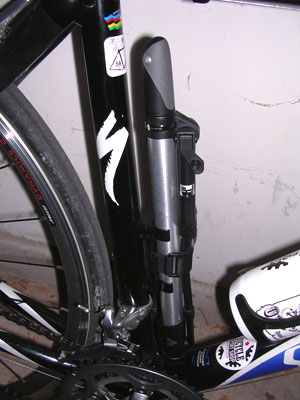 The LBS was happy to exchange the pump for a new one — one that had the bezel. I decided I didn’t like the zip tie attachment, so I took off one of the water bottle brackets and mounted the pump there. Now it not only works the way it’s supposed to — it looks better, too. I think.

Yeah, I know, I’m down to one water bottle per ride now. Not a problem. One bottle is good for about 20 miles for me, and when I run low, I look for a gas station or some other place where I can fill it up. Since I’m not planning on riding another century anytime soon, I can get along fine with one bottle. And if I really need a second one, I can put it in one of my jersey pockets.

So far, I’m happy with my decision. The little pump has several features that make it act like the big guys. It has a little flange that flips out so you can hold it under your foot, just like a floor pump. Its handle can flip sideways to resemble a t-shaped handle for pumping. It even has a rudimentary pressure gauge.

I have yet to try the pump under battlefield conditions. It’s only been used to pump up some spare tubes in my garage. But it worked just fine on them, got them to full pressure without a hassle, and when my next flat comes (knock wood) I’ll be ready.

I’m probably flirting with danger here, but it’s been awhile since I’ve flatted.

Even so, I try to be ready if it should happen. My seat bag has a spare tube, a patch kit, and what I would most likely use in the event of a flat — a CO2 inflator and several CO2 cartridges. 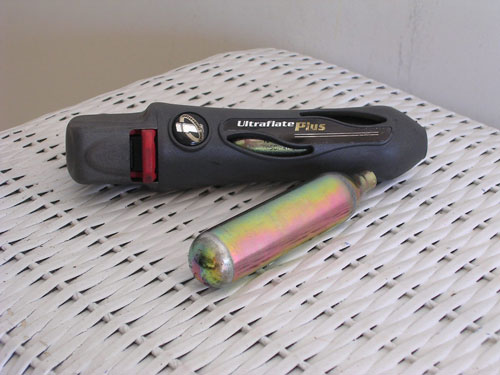 The CO2 is convenient, but it’s not a panacea. When I have flatted in the past, I’ve found it’s not easy to get the right amount of air into the tire. I’ve resorted to a series of short bursts on the inflator trigger, and try to determine by feeling the tire whether it’s got enough pressure. When I first started using it, at a time when flats were much more frequent, I sometimes wasted a cartridge and needed two to fill the tire. And sometimes, I only managed to inflate the tire enough to make it home.

Another concern is the cost. The cartridges run about $3.50 each, so if one or two are wasted by fumbling around, the tire repair is suddenly costly. I usually carry four in my seat bag, so I can give one or two to another biker who might be flatted with no air.

Then there’s the environmental issue. Carbon dioxide is a greenhouse gas. Do I really need to contribute to the Earth’s problems?

What’s the alternative? A pump. The choice is between a frame-mounted pump and a mini-pump that can mount to a frame or even fit in your jersey pocket.

The issue with the pumps is also one of convenience, and efficiency, too. I’ve had occasion to use a mini-pump, and I’m not crazy about them. They have trouble supplying enough air pressure, especially to a road tire that may take over 125 psi. But I like the convenience of the CO2 inflator, and I’m not sure if another gizmo fastened to my bike frame would be worth the bother.

For now, I’ll continue to go with the cartridges and inflator. I’ve had enough experience with them that I’m confident I won’t waste them in future situations. And for every day that I go without a flat, cost becomes less of an issue. But I’d sure like to hear your opinion. Inflator or pump?

(Since this post last July, I’ve resolved the issue to my satisfaction.  Here’s what I decided.)