After the recent demise of my Cateye V2C cyclocomputer, I had a decision to make. I have its predecessor, a Cateye Strada Cadence, and I could put that back on — or, I could go a different route completely.

I got out the Strada, but whatever I did to get it on the bike the first time around wasn’t working this time. I couldn’t make the wiring fit. There’s a lot more wire than I need to cover the distance from the chainstay up the downtube to the bars. Not being a very patient person, I tried a few times to get it mounted, and then gave up.

The different route I decided to take involved buying a new computer, but not a high-end one. I had read of some cyclists’ experiences with the cheapo beginner computers, and in most cases, they were satisfied. I rolled over to Wal-Mart and found one.

It’s a Schwinn 12-function computer. The 12 functions are inflated, I think, because several of them aren’t of much use. However, it does provide the main numbers you expect: current speed, distance traveled, average speed, maximum speed, time of ride. A “scan” mode displays each of these items for five seconds, then advances to the next one. It also shows you whether you’re traveling above or below your average, and what your “trend” is — whether you’re speeding up or slowing down. An odometer keeps track of your total mileage.

Mounting it on the bike was relatively easy. The magnet goes on the front wheel, and the sensor unit on the fork. A wire snakes up the fork and a brake cable to the handlebar mount. Click the computer into the mount, and you’re ready to use it. As you might guess, all attachments are via zip ties.

I must say, I’ve been pleasantly surprised by its performance in the several weeks I’ve been using it. One of the big advantages over the Cateye is that it starts immediately once the wheel turns. The Cateye would go into a sleep mode after several minutes, and you had click a button to get it working again. Many times, I would leave a rest stop — or even the beginning of the ride — only to realize  that I’d forgotten to start it and I’d miss as much as two miles worth of data. Another advantage is that it runs on triple-A batteries, which you’re more likely to have around the house than the disc batteries used in other computers.

Early on, I took the bike out to the Veloway where I know the distance around the track. One lap is 3.1 miles. I had punched in the correct wheel circumference earlier, and sure enough, it registered 3.1 miles per lap for three laps. Good enough for me.

Are there any disadvantages? For a $12 unit, of course there are. It’s a two-button computer, with the left side for odo, distance, max speed, avg. speed, and trip time. Click the right button, and you get only the current speed and current time. Not a problem, until it’s time to zero the computer for a new ride. Theoretically, pressing the left button for two seconds will zero distance, avg. speed, and trip time. However, you have to make sure you’re out of scan mode, and off the clock time setting. I’ve learned to set it to distance, then zero it from there. It took me several days to get the hang of that, and I inadvertently zeroed the odo two or three times until I figured it out.

One quirk is that it measures distance in thousandths of a mile. Why, I have no idea. It’s not useful information. I think anything over a tenth of a mile is unnecessary, and it can be a little confusing to glance down during a ride and see the thousandths tick off faster than the wheel rotates.

It also doesn’t have cadence. I’ve gotten accustomed to seeing cadence during my rides, but frankly, I’ve never done much with that information. Sometimes I’ll do a Veloway lap where I keep the cadence at 90 rpm or above, or I’ll do hill repeats and try to maintain the same cadence for each repeat. But that’s about it. Since I’m not training for any kind of speed event, cadence is something I can easily live without.

So I’m pretty happy with my cheapo computer. It does what it’s supposed to do, and does it dependably, so far. We’ll see if I feel the same way in a year or so. But for now, what more do I need? 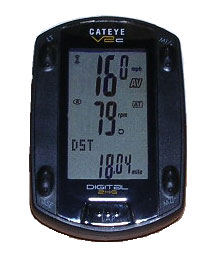 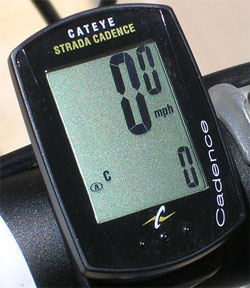 As I’ve mentioned before, my wife and I are participating in training rides for the Mamma Jamma ride to support breast cancer research. Sunday’s ride was in San Marcos, Texas, the town where I work, about 30 miles south of Austin. We were both looking forward to the ride, because it would be on new roads for both of us.

But while bowling Saturday, I pulled a muscle in my hip. Walking around was painful. I wasn’t sure if riding would be smart.

Pat said she would do the 17-mile ride. There were also options for 37 and 49 miles. I wanted to do the 37, but when I walked outside to get the paper at 5:15 Sunday morning, the heat and humidity were already oppressive.

She was glad to hear that, because it meant she wouldn’t be on her own. Not that she would be anyway, because Mamma Jamma rides always have ride leaders. Today’s were from Tough Cookies, an Austin-based women’s bike and triathlon team.

At the start, I watched enviously as the 49 and 37-milers took off. The weather wasn’t as bad as I’d thought. It was about 80 degrees, and humid like Florida (yech!), but enough clouds moved through the sky that the sun was mostly blocked. Still, I was going to favor my hip.

The 17-mile riders, as you might imagine, were the slow group. Within minutes of the start, one had tire problems. A sag car with a floor pump caught up to us, and the sweep rider started to pump up the tube. But it had a bent valve, and looked like it would take some time before it was ready. Four of us, including the Tough Cookies leader, decided we’d leave on our own.

I looked at my computer to check distance. Nine-point-something, it said (I have a heckuva time reading the thing without bifocals). Two or three miles later, I glanced at the computer again. Oh-oh.

Speed measured zero. Cadence measured zero. Mileage was still 9-point-something. I didn’t think we’d bounced around enough to knock the sensors off kilter. At a convenience store, we stopped to refill water bottles. The computer was blank. I checked the sensors, and they still lined up closely to the magnets. My batteries had died.

Now, this shouldn’t be a big deal, but when you’re an OCD record-keeper like I am, it can be catastrophic. I calmed down though, reminding myself that I would just take the data from the ride leader’s computer at the end.

We wound through seemingly endless rows of apartment complexes, which house students from the nearby university. Back out in the country, we made good time and reached our starting point quickly. The sun was just starting to come out from behind the clouds. I was drenched in sweat, but the breeze had cooled me during the ride, and I was quite comfortable. I walked over to Kathleen, the ride leader.

“So, what was the mileage and time?” I asked.

She looked at her computer. “Nine-point-six-eight miles,” she said. I grimaced.

“Which is wrong,” she added.

Her computer had died, too.

An acquaintance of mine makes it a point to change his computer batteries on New Year’s Day each year, “Whether they need it or not,” he says.

My batteries had died just a year after I got the computer, but these replacements were still going strong (I thought) a year and a half later. Now I know better, and I’ll be replacing them annually, too — say, on the Fourth of July.

So instead, I logged onto Map My Ride and mapped out the route. 17.8 miles. We were out there for about an hour and 50 minutes, but that included a 15-minute convenience store stop while we waited for the slower riders — who never did catch up. The average speed worked out to 13.4 mph. Okay, that’s close enough.

But I’m not going to let that happen again. Later Sunday afternoon, I hit the supermarket for some new batteries. The computer was running like a champ on my Monday morning ride.