We had a bunch of errands to run this morning, then the grass needed cutting. I can stay home some weekdays, so today was a day to attend to those chores. By the time I was done and starting to think about taking the bike out, it was 98F (37C). The forecast called for a high of 102F. And there’s no relief in sight — tomorrow’s high is expected to be a record-breaking 103F, and we have forecasted highs in the 100s for the rest of the week.

Last summer, I had a heck of a time dealing with the heat. My performance sagged when the temperatures got past the mid-90s, and I found myself passing up scheduled rides on a regular basis. That in turn lowered my performance level.

This year, I was determined to handle the heat better. I poked around on the Interwebs (“It’s a series of tubes.” — Former Sen. Ted Stevens, R-Alaska) to see what the online sages say about it, and here’s what I’m doing this summer.

Step number one — drink more. And not just on rides. I’m drinking throughout the day. A big glass of water before going to bed, and I watch my cyclocomputer’s timer during rides so I remember to take some water every 10 minutes or so.

Two — I carry some kind of electrolyte drink. Currently, I’m using Nuun. One bottle is filled with plain water, one with water and a Nuun tablet. The Nuun isn’t as cloyingly sweet as a lot of sports drinks. In fact, the taste is light, and I can handle it better than other drinks when it warms up 10 minutes into the ride.

Four — Sunscreen. I forget to put on sunscreen before rides with some frequency, but now it’s become part of my pre-ride routine. I’ve heard that a generous coating of the stuff will lower skin temperature by as much as 20 percent, and help keep you cool. That hasn’t been my experience yet, but I know I’m better off with it than without it.

Five — Acclimate. Ride a little more in the hotter weather to get used to it. Not my favorite thing to do, but it’s probably necessary.

Six — Ride earlier. This is a no-brainer, and it’s something I’m working on. Instead of going out mid-morning, I’ll go out around 8 a.m. If this heatwave sticks around, that might change to 7 or earlier.

Seven — Take frequent breaks, in the shade. I typically stop every hour or  so, and I should do it more often in the kind of weather we’re having now. Even in extremely hot weather, sitting in the shade of a tree with a slight breeze blowing around you will rejuvenate you quickly.

I just checked the temperature again. It’s 99. I’m going for a ride.

Today should have been a great ride. I decided to combine two rides I do often into one, and come out with about 35 miles. I did the ride as recently as last week. But today it was agony.

Things started out great. I headed out Mopac, which I’ve mentioned here before. Traffic is generally light on Sunday mornings.

The shoulder on Mopac disappears at several places. The SUV was probably moving at about 65 mph. The bikers ahead were on hybrids, and I was catching them fast.

I felt good as I finished up the Mopac loop, and headed north to pick up Southwest Parkway. Southwest Parkway is also a four-lane divided highway with (usually) generous shoulders. Traffic can be heavy, but it’s a biking favorite, because it’s fairly hilly. I took advantage of the long downhill once I hit the parkway, and reached a speed of 37.8 mph. I detoured through a pleasant residential neighborhood for a few miles, and just before the route rejoined the parkway, I stopped for a break at about 22 miles. The Larabar in my pocket was good, and I finished off one of the water bottles and took a swig from the second. I stretched a bit, walked a bit, and headed out.

I had to go back up the long hill I’d flown down, and I felt as though I lacked energy today. I got up it all right, but didn’t feel the snap to my pedaling that I do on a good day. At the top of the hill, I paused for a picture of some fabulous houses that hug a ridgeline. 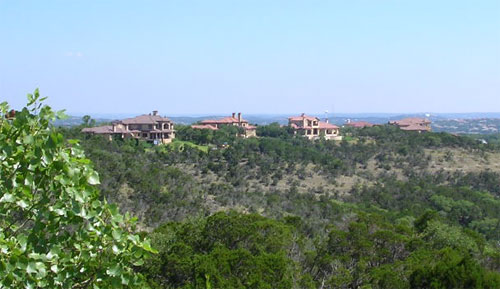 These houses are along a private road that dips down into a valley. It’s popular with bikers who really like to hammer hills, because most riders start in the valley and come up along the houses.

By this time, I was getting concerned because my butt was really bothering me. I was wearing my new bibs with a generously-padded bottom, and I’ve liked my saddle since I first got it, but today I couldn’t seem to get comfortable. I was pleased that I could deal with the discomfort well enough to get up the the steepest hill on the route — slowly, but at least smoothly. From this point, it’s only about five miles to home, with some nice fast downhill stretches.

But I think the heat was getting to me. It was about 92°F (33°C) — nothing I haven’t been used to this summer, but not this far into a ride. I was slogging. The going was made worse by the fact that the city is laying new chip seal on a road near home, and it was rough and unfinished.

Just as I turned the corner to head into my own neighborhood, my left thigh cramped up — painfully. I couldn’t turn the crank, and almost had a clipless fall until I could regain control, stop, and dismount. I shook the thigh to loosen it up, while a pair of turkey vultures perched on a light standard across the street hoped I would just collapse already, so they could have lunch!

I didn’t collapse until I got home, though. I gulped down a pint of water and fell into bed. I was baffled why things finished with such difficulty today. This ride wasn’t any farther than I’ve gone a number of times before. It was on familiar roads. I carried adequate water and food, and was pretty good about drinking every 10-15 minutes. My average speed was slower than usual, but only by about a half mile per hour.

I figure the heat must have had something to do with it. It was the only variable that had changed, being hotter today than the last time I rode this route. And I must admit, I probably did push it more than I should have on the Mopac portion of the ride, when it was a bit cooler.

Still, if I’m going to increase my weekly and long ride mileage to get ready for some new biking challenges, I have to figure out why today left me with so little energy. And what’s with the sore butt?

I had a post all ready to go tonight, moaning about the record hot temperatures we’ve endured in central Texas for the last two weeks, and how it’s affected my biking (I don’t get out as much). But a little cold front formed up north, and slid our way bringing overcast skies and even a drop or two of rain. I got out after work and had a great ride.

I’m always pleasantly surprised at how well I do after a longer than usual layoff. Today I rode almost 23 miles at an average speed of 16.8 mph. That’s 1.5 mph faster than my typical ride. Part of it was due to not having ridden since the 15th (Sunday), and part of it was due to the 79°F (26°C) temperature when I left my house. The ridiculous upper 90s that sap my energy didn’t show up today. It was more humid than usual, but who cares?

We might even get a little rain over the weekend, so my Sunday morning ride has the potential of being a comfortable one, too. But the forecast for next week has us back in the sauna again. I’ll be sure to freeze my water bottles before heading out on my next ride (that way, the water will stay cold for at least the first 10 minutes!).