When we did our city tour two weekends ago, one of the highlights was Mt. Bonnell. I’d never climbed it before, and I was looking forward to it, for some reason. I guess I had an unrealistic idea of my climbing ability.

Going through neighborhoods on the way there, we came upon a short, steep hill on a residential street. I downhifted to a low gear, but was up out of the saddle, standing on the pedals, struggling to mash the pedals down and keep the wheels turning. I could have gone down two more gears, but because the bike was straining already, I figured I’d lose all my momentum if I tried a downshift, so I kept grinding away. The bottom bracket made a creaky noise I’d never heard before. As long as I could make the bike protest, I thought, I had enough left in me to get up the hill.

And I did. Man, that was a tough one, and with car traffic coming from behind, I had no choice but to go straight up the road — no chance to zig-zag up the hill.

On Mt. Bonnell itself, we had a challenging grade to a right-hand bend, and then the grade steepened. I pulled into a driveway, did a loop, then shot back onto the street with some forward momentum. That momentum carried me, oh, maybe 10 yards or so. This time, I shifted down all the way into the granny gear. I was still tired from the earlier hill, but there was no traffic this time, and I used the width of the street to zig-zag my way up. It seemed like it would take forever, but I finally made it to the top.

An experienced biker riding with us guessed the grade was between 16-20 percent. I decided I wouldn’t be in a hurry to tackle it again (you might recall that I made a wrong turn, and we wound up climbing Bonnell again from the other side — but we walked our bikes this time, too pooped).

My conclusion is that I don’t do enough challenging hills as part of my regular rides. I’ve got some routes that include hills, but nothing like Bonnell. So I suppose I was just undertrained for it.

But if I have to mash pedals in the granny gear time after time, I’m not sure I want to get much better at hills.

What do you suggest for a noob to become at least a little more adept at climbing?

Funny how what used to be major biking milestones now pass almost unnoticed.  I completely missed it, but back on May 13th, I hit 1,000 miles for the year.  Last year, I didn’t hit that magic mark until June 13th. Now I’m wondering what kind of mileage I’ll wind up with for the year. My total last year was 2,677. I should hit 3,000 with no trouble this year — but I won’t be making a conscious effort to do it. I’ll just enjoy my rides.

Like the ride we did today out in the Hill Country. A friend suggested we ride from Dripping Springs this morning, so he, Mrs. Noob and I, and three other friends drove the 12 miles out there and rendezvoused at 8:15 to hit the road.

Mrs. Noob — uh, Pat — and her friend Susie decided not to try to keep up with the rest of us, or to go as far. I’ve mentioned Pat’s bike before. Here it is: 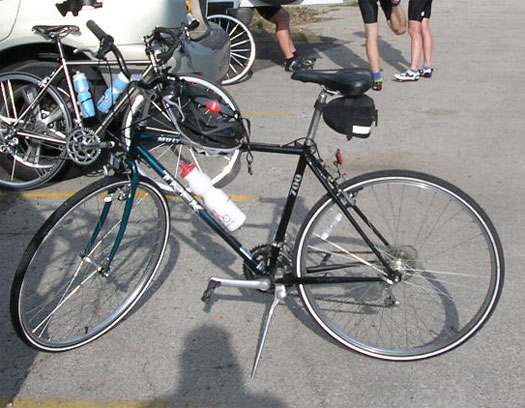 She catches a lot of flak about having a kickstand, but she does ride clipless. The tires are 32mm, and she had the bike shop add a higher stem to give her a quite upright position when riding.

We hit the road with four other women we called “The Green Team,” since they all wore hi-visibility green vests. They stuck with us for the first seven miles, then we split off.

This is one of my favorite rides in the area. The country roads are in pretty good shape — a few rough patches — and on Sunday morning, traffic is light. 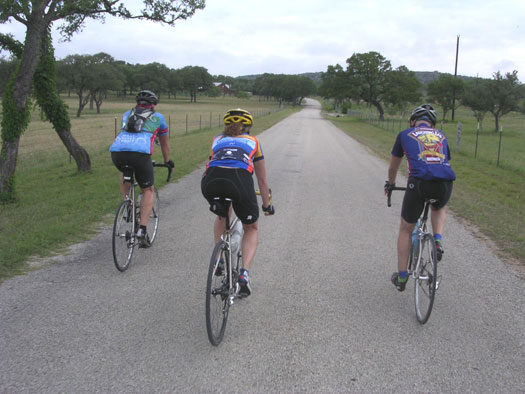 Here’s what most of the ride looked like to me: Scott, Dee Dee, and Tom lead the way along lightly-traveled country roads.

Clouds blocked the sun for most of the ride, and the temperatures held in the mid-70sF. Quite humid, though, as the forecast called for a 70 percent chance of rain. We hoped we would wrap things up before it got wet. 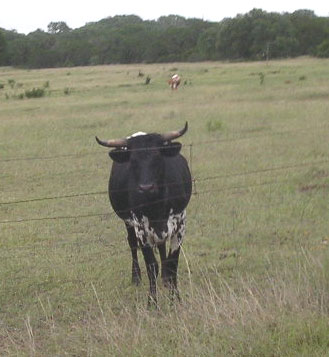 What vehicles there were are used to bikers on these roads over the weekend. We’re careful to move to single file along the edge of the road when we detect a car or truck coming up behind us. The animals are equally blase about bikers. This cow has seen it all before, and we didn’t interest her in the least.

Remark from Scott: “Isn’t it funny how a little bit of skunk odor actually smells good?”

We climbed moderate hills in easy gears, keeping up our momentum most of the time. Tom had some derailleur trouble, which made smooth shifting a challenge. He’s a strong rider, but because he had to concentrate so much on his gearing, he described his ride as “hard work.”

But for every uphill there’s a downhill, and we got down in the drops as the road swept us along. As a result, none of us were at all tired when we got back to our starting point. The stats: 34.3 miles at an average speed of 14.7 mph. Pat and Susie had ridden a little over 19 miles, and were already lunching at a nearby cafe when we pulled in.

A good ride, a meal with friends, and we pulled the car into the garage just as the skies opened up. Can’t get much better than that.

Today’s ride capped off a week where I rode every day but Saturday, for a total of 125 miles. I can’t remember the last time I rode that many miles in a week. With two more weeks to go until summer classes begin, it looks like I’ll be spending a lot of time in the saddle. Can’t wait.

I set a record the other night.  It took me a full hour to get a tire mounted on a wheel.

I bought a new tire to replace one that had some severe cuts on the  tread. Since I had a 52-mile ride coming up Saturday, I didn’t want to risk anything — even though the cut tire had seen a good 200 miles on area roads since getting cut in two places by broken glass three weeks ago.

New tires are not as elastic as they get to be with some riding. This one was right out of the mail order box. I put one foot inside the tire, and tried to pull up on it like a rubber band. No give at all.  I turned the tire several times, and pulled each time, to try to add a little bit of stretch to it.

Then, on the wheel. Getting one side into the wheel wasn’t too much of a problem, although even here, I had to patiently work the remaining three inches over the rim. I got the deflated tube inside the tire, then started stretching the other side over the rim.

It was fine for about half the tire’s circumference. Then, it didn’t want to cooperate. Again very patiently (a rarity for me) I worked the bead over the rim bit by bit, and popped it into place. Finally, I had five inches to go. It wouldn’t go. It was as though the tire had reached the limit of any stretch built into it. Whenever I managed to get a small section of bead to pop over the rim, the bead at the other end popped out. It seemed I would be unable to get the tire seated properly.

I know you’re not supposed to use tire levers to mount a tire. There’s some danger they might puncture the tube. I yielded to temptation. The levers worked — sort of. I now had only a three-inch section that refused to mount.

I change tires when they flat from time to time, but I haven’t had a lot of experience putting new tires on. They’re very different from changing flats, when the same tire that has miles on it is put back on the wheel. I’ve never had a lot of trouble with those, because use has stretched them out. It’s the brand new tire that was the troublemaker.

These are kevlar tires — I don’t know if that would make any difference or not. But I do remember that the only other time I mounted a brand new tire — one that was not kevlar — I didn’t have anywhere near the trouble.

Any suggestions for making the mounting of a new tire any easier?

P.S.: I was glad today that I did get the tire mounted. I did a hilly 52-mile route from Dripping Springs to Johnson City, Texas, and back again. It was a training ride organized by the Hill Country Ride for AIDS, but I used it as my last hurrah before the MS 150 next weekend.

I just hope the weather next weekend is better than we had today. It was forecast to get to 80F, but never got above 60, with a chilly northeast wind blowing all morning.