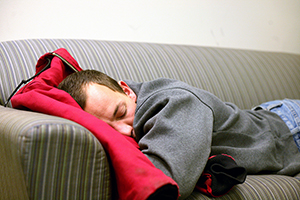 It started a few years ago. I’d come home from a ride, especially one of our Sunday morning club events, shower, eat…and soon, I’d be on the bed, dead to the world.

My post-ride nap was a refreshing interlude.

Now, this from a guy who has never really napped in his life. I tend to sleep very little — maybe 5-6 hours overnight, and I can function just fine. If I ever did feel tired during the day and I made an effort to take a nap, it never worked. I just stared at the ceiling.

So when I started napping after longish bike rides, it came as a bit of a surprise to me. My wife joked that nothing would get done around the house until late in the afternoon, because I’d be conked anywhere from one to three hours. In fact, she found it a bit exasperating after awhile, because sometimes the lawn wouldn’t get mowed, or the edges wouldn’t get trimmed, or some other chore that I normally did on Sunday afternoons didn’t get done.

Of course, anyone who does nap at all is aware that you can overdo it. If I’m down for three hours in the middle of the day, I’m not one hundred percent afterwards. A little bit of drowsy clings to me. I walk through the rest of the day in a bit of a fog, and I’m not really alert until well into the evening.

But lately, my post-ride nap on Sundays has spread over all my ride days. I can do an easy 20-25 miler close to home, and I’m out. In fact, every time I ride, I can count on at least a short snooze.

Over the past two days, I sneaked in a short mountain bike ride after getting home from work. Just about an hour, on single track trails in the neighborhood. Not particularly hard work, although I know that I work twice as hard on my mountain bike as I do on my road bike. Our family routine has us watching the TV show “Jeopardy” from 4-5 p.m., then news, then some other syndicated fare. I don’t sleep through all of it, but now I’m sleeping through some of it — sitting upright in my chair in front of the TV. These naps last only 15 minutes or so, but I might get in two with some awake time in between.

Now, I look forward to my naps. Unless I’m down for a couple of hours, I wake up rested and refreshed. I know I wouldn’t be able to do that without the bike ride to prompt my body in that direction.

Do you nap sometimes, always, or never after rides? 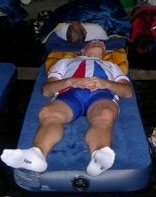 I’ve never considered myself a napper. I’ve always gotten up fairly early, and stayed up until midnight. But as I get older, I’ve been noticing a change. When I go for a ride, I usually follow it up with a nap.

Sometimes, I just drop off in my easy chair, and I wake up when my iPad slips from my hands and falls to the floor. Sunday, it was 90 minutes, and I woke up when my dog jumped on the bed and licked my face. Once in a while, I can be out for as long as three hours.

I must be turning into a lazy bum.

But that turns out not to be the case. (Are you listening, Mrs. Noob?)

It turns out that we’re hard wired to sleep deeply twice each day. Once between 2-4 a.m. and the other between 1-3 p.m. That latter time corresponds with most of my post-ride naps. Our bodies just slow down about that time each day, so our reaction time slows, we’re less alert, our coordination suffers, and our memory isn’t as sharp.

So napping is a natural act, with some worthwhile benefits. After a snooze, we see better productivity, creativity, alertness. On the physical side, naps reduce stress, as well as risk of heart attack, stroke, diabetes, excessive weight gain.

What I have yet to master is controlling the length of my naps. We get different benefits when we sleep for different lengths of time. For example, a 20-minute catnap will improve concentration, alertness, and motor skills. If you have to do something after you wake up, try drinking coffee just before the nap. The caffeine will kick in after about a half hour. You’ll be rested and rarin’ to go. But you might also want to set an alarm to keep from sleeping too long. Anything over 45 minutes will leave you feeling groggy.

I suspect my longer 90-minute to three-hour naps are my body’s way of telling me I need more sleep at night. I’ve always been able to function fine with just six hours, but my body seems to be telling me different.

Anyway, after pounding the pedals for a three-hour (or longer) weekend ride, I won’t be embarrassed about sneaking in a little sack time from now on.

“Are you riding again tomorrow morning?” asked my wife, as we were driving home from dinner out with friends.

She was silent for a moment.  Then:

“I think we’ve reached the point where biking is taking over other important things in our lives.  When you ride on the weekend, you’re gone all morning, then when you get home, you crash on the bed for two or three hours.  There’s a lot of work around here that’s not getting done.  Now that your 100-mile ride is out of the way, it’s time to start pitching in more around here.”

Ouch.  She’s right.  Well, I’m usually not gone all morning on Saturdays, but Sundays can turn into three or four hour rides.  And yes, I do seem to be prone to napping after an exhilarating ride.

She ticked off a couple of must-do items: “We need to do the windows, especially the glass in the arched tops.  That bush on the front corner of the house needs to be drastically cut back.  The garage needs to be cleaned out.”

Right again.  Okay, I’m still doing the Sunday ride, then I’ll plunge right in to cleanup when I get home.

I had planned a B-level ride of about 35 miles, heading out in the same direction as the rest of the club, but stopping short and turning back before they hit their hilliest part.  As it turned out, no other B riders showed up, and 10 miles into the ride, I struggled up a tough hill.  Everybody waits in a parking lot at the top of the hill, but as I approached the crest, I saw them pulling out of the lot.  I flagged down the last rider and told him I was peeling off from the group.

Pat was surprised when I walked through the door just an hour and a half after I left for the ride.  She had on her bike clothes, and was just about to head out for a ride of her own.

I got the windows done, and did some maintenance on our old Kirby vacuum cleaner.  But after a short lunch break, her prediction came true — I flopped on the bed for a two-hour nap.

Okay, the bushes and the garage will get their due next weekend.  I’ll still ride — but I have a hunch my riding will take up a lot less time through at least the end of the year.