Over the last year, I’ve blogged more than once about my Selle San Marco Ponza. It’s the saddle I mounted on my bike last May, after complaining about the hard ride on my previous saddle. 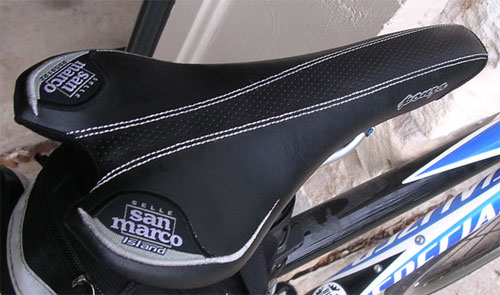 I liked the Ponza for its narrow race-inspired shape. It has a slight upsweep at the back, which cradles the butt. I wasn’t getting the soreness on my bottom that the previous saddle was giving me.

That was before I started riding longer on it.

It’s been evident for some time now that the Ponza is okay for anything up to an hour. At about that time — maybe 55 minutes, maybe 65 — my butt hurts. Specifically, the soft tissue area right at the bottom of my bottom hurts. And the soreness will be there well into the next day.

In addition, I’ve been developing saddle sores. Bag Balm seems to do a good job of dealing with them, but still — on a ride of several hours’ duration, you don’t want to have to deal with an irritated pimple on your butt being rubbed uncomfortably by a saddle that has turned against you.

Much of the time, a one-hour saddle is fine for me. I can ride from my home to the Veloway, do three or four laps, and ride back home in roughly that 55-65 minute window I mentioned above. That’s about 15-18 miles.

But on weekends, I like to go longer. Two hours would be the minimum for me there. And to do that would require another saddle.

Recently, I did a Sunday ride with a group of folks I’d never ridden with before. Looking over their equipment, I saw many more generously padded saddles than I do on my club rides. When I asked people if the padded saddles don’t cause them problems on long rides, I got a unanimous no. Everyone said they feel as good after three hours on the bike as after an hour.

So, despite everything I’ve read or heard about how padded saddles can compress your sensitive parts, and cause just as much discomfort as the hard ones, I decided I would go for something cushier this time.

The new saddle is on the bike, and I had a good first ride. But I’m going to wait a bit before I review it. I need to get more miles on it — and rides of longer than an hour.