Our friend Jeff Hemmel sent this story about another crackdown on bicyclists — this one in St. Petersburg, Fla., where police ticketed 16 cyclists in one day for failure to stop at a stop sign.

We’ve covered stop sign issues here before — and police crackdowns on stop sign scofflaws — so this isn’t really anything new.  What interested me on reading the article was this sentence: “Petrak said she knows she should obey stop signs, but clipping and unclipping her bike shoes slows her down and can make it dangerous when crossing intersections.” 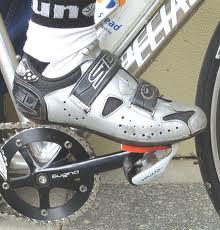 When I took the League of American Bicyclists Road I course — now Traffic Skills 101 — I got points deducted during our ride through the city because I didn’t put a foot on the ground at a stop sign. Their attitude is that stop means stop.  That’s the attitude the Austin Police took last year when they ticketed several members of my club for not stopping at a stop sign. But to them, a full stop means the cyclist should put a foot on the ground.

Okay, I’ll come clean.  I still don’t put a foot down at every stop sign.  Certainly, if there’s no traffic at an intersection, I’ll slow, then go.  If there is traffic at the stop sign, I’ll slow to a track stand, kind of — I’m not very good at them, but I can hold my position for a few seconds, anyway. But unless I get a signal from the driver right away that I can go, I clip out and stop. That’s a very unmistakable signal that I want the driver to go before me.  It’s also one reason I have my pedals set to very light tension.

But I think that comments about the burden of having to unclip at stop signs do nothing to mitigate the antagonism between motorists and cyclists.  We come across as whiners who want everything our way.

If it’s too much of a hassle to clip out, I suggest a little practice is in order.  Do it while supporting yourself against a wall, or a tree, or a light pole.  Keep doing it until it becomes second nature.  Tip: I have found that I clip in faster and easier if I just do it by feel.  It’s when I sneak a look down at my foot that I have to try two or three or more times to get clipped in.

And as far as the safety issue of crossing intersections, I learned long ago that the cyclist’s first job is to get across.  More often than not, I just rest my foot on the pedal and pedal across the intersection, then I worry about getting clipped in.  Sorry, but it’s not a big deal. 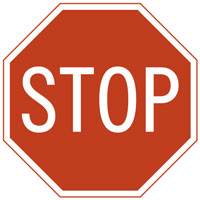 I think we can all agree that it’s bad to run stop lights. I will always stop for a light, and will sit at an intersection waiting for it to change even if there is no cross traffic. For one thing, that’s a good opportunity for me to grab a drink from my water bottle without fumbling around while I’m on the move.

Stop signs, however, are another matter. I will stop for a stop sign, too — under certain conditions. For instance, if it’s by a school, and there’s a crossing guard (not much choice there). Or if I see that there are cars in the intersection. Then I’ll take my turn and stop, too.

When I took the League of American Bicyclists Road 1 course (which is now called Traffic Skills 101), the instructors were adamant about stopping at signs. You had to come out of your seat and put your foot on the ground for it to count as a full stop. In fact, on our check-out ride downtown, I got zinged because I failed to put my foot down at one stop sign, even though there was no other traffic in the intersection.

But 90 percent of the time, I’ll treat a stop sign as a yield sign. I’ll slow, check the intersection for any traffic, and once I’m satisfied there’s no one there, I’ll go. Sometimes, I’ll slow almost to a track stand. Mostly, I’ll shift down a couple of gears and brake to walking speed. But I don’t stop.

There’s legal precedence for bikes to roll through stop signs. Idaho has had a law on the books since 1982 that allows bikes to treat stop signs as yield signs. Montana is considering such a law, and so is Oregon. That doesn’t mean bikers can just run the sign — they have to slow and check traffic conditions first, which is exactly what I see most bikers do anyway.

The tricky part is when cars and bikes do meet at signed intersections. Just the other day, I was returning home from my club ride, and came to a signed intersection two blocks from my house. A car was approaching on my left, and slowing to stop for the sign. I braked, because it was a four-way stop. The car reached the intersection first, which would give it the right of way to proceed first from the sign. But it came to a dead stop, waiting for me to go through the intersection first. Well, that’s very polite and all, but it actually put me in a bit of a jam. I was almost, but not completely, stopped for the sign, and every second she waited made me practice my track stand skills a little longer. Finally, she signaled that I should go first. I shrugged my shoulders to let her see that I was fine with her going first, but then I crossed in front of her.

If she had just followed the rules of the road, she would have stopped first and gone ahead first. I would have just about stopped, but given her the right of way to go first, and still had enough momentum that I wouldn’t be concerned about falling over. It’s that kind of thing that can cause car-bike accidents.

It’s at that same intersection that I have often seen cars blow right through the sign without even pretending to slow for a stop. A former resident of that corner used to chase after cars and yell at them when she saw them do that, but she has since moved away. I’m not saying that because cars do it, we should too — but it appears to be a clear case of the pot calling the kettle black whenever motorists complain about bikes not stopping at signs.