Every so often, something happens that reminds me I’m still a Bike Noob.

This time, it involved my cyclocomputer. At the Real Ale Ride, we were packing up to go home. I unclipped the computer from its mount, and slipped it into the back pocket of my jersey. After the bikes were securely strapped onto their carrier, it occurred to me that I could put on the spare t-shirt I had brought to the ride, so I shucked off the jersey and changed into the t-shirt.

That evening, when I looked for the computer to add its data to my ride stats (I’m a dweeb), I couldn’t find it anywhere. I finally concluded that it had fallen out of my pocket to the ground when I took off the jersey. I wasn’t too broken hearted about it. It was a good first cyclocomputer, but now I had an excuse to go shopping. (Which for men is an entirely different experience than for women. They buy clothes. We buy toys. Toys are more fun.)

Anyway, it had been suggested that I look for something that measures cadence. The winner: 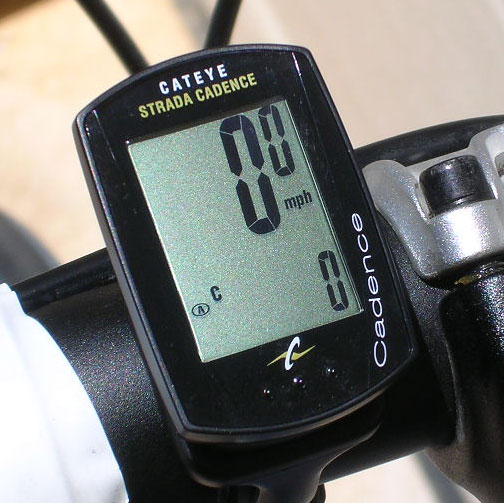 It’s the Strada Cadence by Cateye. It just looked like a quality unit. It’s wired, which my previous computer was not, so I had to contend with that when I installed it — and it took a couple tries before I got it right. But this afternoon, I got to take it on its maiden voyage.

I did my favorite 15-mile after work ride: My house to the Veloway, three laps, then home. Map My Ride puts the distance at 14.9 miles. The old Ascent consistently called it around 14.6. Today, the Cateye had it at 14.74. Pretty close.

But there’s one hitch. The cadence sensor isn’t working. The crank on my Allez stands out pretty far from the chainstay, and I don’t think the magnet on the crank is close enough to the sensor on the chainstay for it to register. I suppose it’ll just take some experimentation on my part. 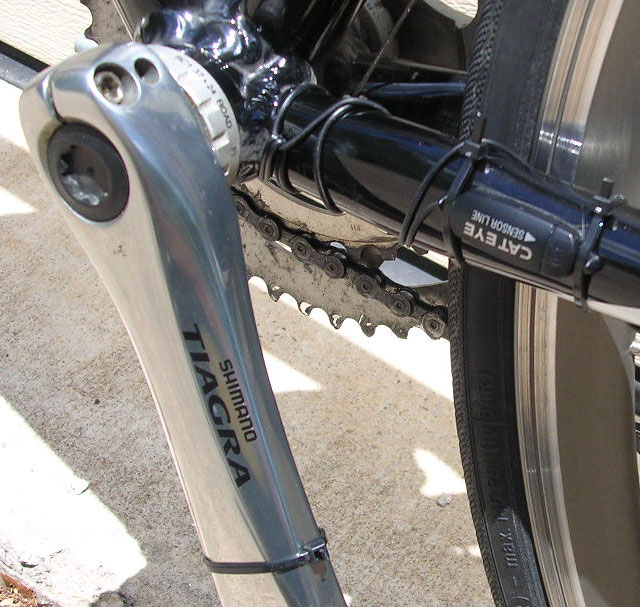 The magnet on the crank (held in place by the zip tie) is supposed to pass over the “sensor line” on the sensor mounted on the chainstay — but there’s a wide gap between the two.

Another problem is that the inside of the crank arm has a concave indentation. That forces me to mount the magnet right on the edge of the arm, to get it as close to the sensor as possible. It’s still not close enough.

Other riders have made this work, and I will, too. But if you have any experience with this particular model, let me know how you solved the problem.